Around our visit to the Alpabzug, unsurprisingly, we also took an interest in, you guessed it, cheese. And that brought us to the small town of Stein. On the edge of this village in the canton of Appenzell Ausserrhoden, there is a complex of two buildings that do a magnificent job in telling the story of local agriculture. There is a museum which displays beautiful folk are with lots of cows and flowers, a live person in a shed who makes cheese with traditional equipment that you can buy in the gift shop (yes, you heard right: go to a museum to buy cheese) and a host of other bits and pieces of local history. It’s a modern, light building with plenty of room for all the art and artefacts. Next door is the Schaukäserei, a place that explains the history and the art of cheesemaking in the region, wrapped around a large cheesemaking facility.

One of the best exhibits is a film that shows an interview with an old Senn, who tells the story of his growing up with a dozen siblings on a farm where the diet consisted largely of bread and dairy products: butter, whey, cheese, milk. Sennen spend their days in summer herding cows, milking them and either transporting the milk down the mountain or turning it into cheese right there in a shed in the meadows. Even today these men and women work in the open with most of their interactions limited to their bovine charges. The old man’s eyes light up when he speaks about the cows, how he likes talking to them and rubbing their heads.

He goes on to explain how the cheese he was used to was normally low-fat: the cream would be scooped off the milk and turned into butter that could be sold at higher prices, and almost immediately: butter provided cash-flow. In the town of Appenzell they still sell this cheese, and call it Rässchäs, sharp cheese. And that, my cheese friends, is not an understatement. This cheese combines and surpasses the sharp saltiness of really old Dutch cheese with the potent stink of a Munster. In fact, a quick scientific survey of everyone in the family irrefutably concluded that it is was worse than any cheese I had ever dared to bring into the home. Räss in flavor and smell, indeed. It is the kind of cheese that will put hair on your chest – I thought it was impressive in the best possible way.

The unusual cheese choices in this part of Switzerland don’t end there. I picked up a few slices of Schlipferkäse at a cheese shop that seems to specialize in unusual cheeses. It came with an interesting recipe: soak a slice or two overnight in lukewarm water (cover it up, but do not refrigerate). The next morning, pour off the water, cover the cheese with some cream, add salt, pepper and cumin as you like, and eat it for breakfast with some boiled potatoes with the skin still on – Gschwellti, as the Swiss call them. Yup – true recipe. I tried it without the Gschwellti and it’s quite pleasant, although I doubt I would often want to go through the trouble. To me some hard cheese with a slicer is easier and less work.

Finally, I got a piece of Suurchäs, sour cheese. This cheese is produced in the neighboring district of Toggenburg, the modern incarnation of a medieval county with the same name. it is made of skimmed milk and therefore has a lot of protein, without much fat. It is white, with a fresh and somewhat sour taste, and as it gets older, a shiny layer develops on the surface that looks a bit like bacon, and is hence called ‘speck’. All three of these cheeses are rather acquired tastes, but not so much the fourth cheese I brought home from Appenzell. It came from the neighboring community of Urnäsch, where the family farms work together in a cooperative that markets several local cheeses very professionally. One of them is made with milk only from cows that have horns – there is some evidence that the milk of these animals tastes a bit different. I got some Urnäscher Brauchtumskäse, heritage cheese, if you will. This one comes in three different ages and mine had ripened for somewhere between 6 and 8 months. It is not a miracle that it won a Super Gold award at the World Cheese Awards a few years ago, because it is salty, creamy, and chockful of flavor. And yes, to make it a nice round number, we did purchase a piece of Appenzeller Edel-Würzig, marketed as superior spicy on the Appenzeller website. The secretive men (and, recently, a young boy) that appear on large billboards throughout Switzerland tell you through their silence that you’ll never know the exact composition of the herb bouquet that finds it’s way into the cheese. And if you would, they may just decide to never let you leave, to protect the trade secret. Things could be worse. 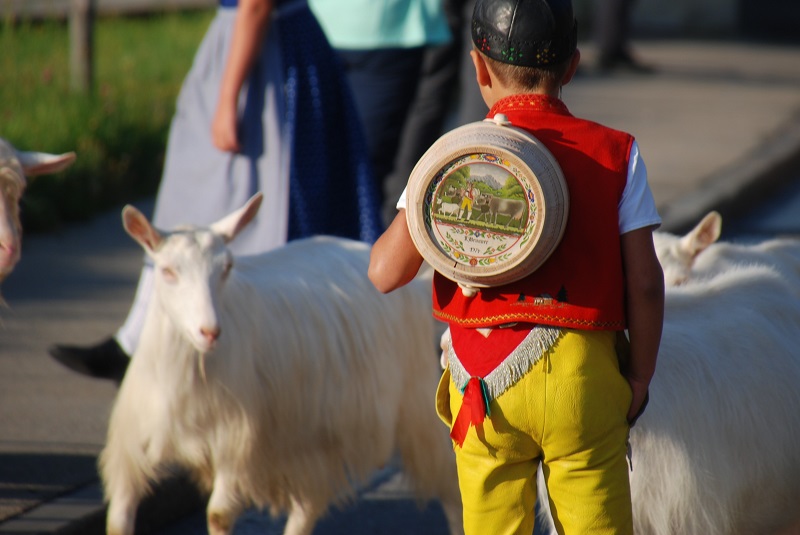 There are cow parades at the end of summer, and then there is the Alpabzug in Appenzell. In the most conservative cantons in Switzerland, where voting is still done by raising hands in the voting square of the town in some places (and women had to fight for much of the 20th century to join in the voting), tradition is on full display when the cows come home in a carefully choreographed ritual. Ahead of the cows comes a young boy wearing yellow pants and a red vest, a little leather cap on his head and a dangling earring in his right ear. He carries a richly decorated Fahreimer, a wooden bucket, on his shoulder.

Then come the Appenzell goats, ushered along by one or more girls who control them with twigs and branches. Next up are the three lead cows, with bells that are carefully calibrated to be in harmony. They are preceded by a Senn, a cowhearder, in the same dress as the young boy. Behind them are three Sennen, also with red vests but wearing brown pants. These men sing or jodel along with the bells, and keep an eye on where the cows go. This is no trivial matter because some of the cows just do not follow protocol all that well.

The herd follows, cows and calves, and assorted humans to keep them in line. Next is a horse-drawn cart, the Ledi, which carries all the implements needed for cheese making. Much of these are no longer in use, but they do make for a beautiful display. Concluding the procession is the owner of the cows, in white shirt, often with bib suspenders, and brown pants. He may have his son along, and his dog, and sometimes he’ll pull a bull along. There are variations – in Appenzell itself I saw a teenage girl pulling the bull (“I cannot believe dad is making me do this” on her face), and you may see some chickens carried along on a wagon, or a pig or so. But mostly, the order is adhered to and everyone goes about it with a curious mix of cheerful solemnness.

We went to Urnäsch in the Canton of Appenzell Ausserrhoden, while overnighting in the canton next door: Appenzell Innerrhoden. Not an unimportant detail, as our stated goal is to spend time in every Swiss canton in the course of the time we will spend here. Urnäsch is small and everyone seems to know each other, and everyone is out to cheer on their farming neighbors. I think there were people along the way who did not just greet the farmer and his family, but also individual cows. There was a market set up where one could buy sausages, Appenzell folk art and – you guessed right! – cheese. In the main street is a delightful museum that tells stories of the very rich folk art and traditions of the area. It is house in an old building with lots and lots of rooms, so you are clambering up and down stairs, watching you head under the low ceilings all the while ooh-ing and aah-ing at the colorful art that fills each room. I am not normally a fan of these attic-like museums, but this one absolutely works – I can only recommend it.

Our day continued up to the nearby Ebenalp to what is perhaps the most famous restaurant in all of Switzerland: the Berggasthaus Aescher, squeezed onto a narrow ledge under an enormous overhang. As tourist sites go, it does get a lot of traffic, but we were comfortably seated and found the food, service and views absolutely worth the climb.

The next morning, our tradition-filled extravaganza continued as we saw local women in traditional dress enter the church across the street from our hotel. Appenzell is easily one of the most picturesque of all Swiss cantons – a living, breathing, voting postcard.