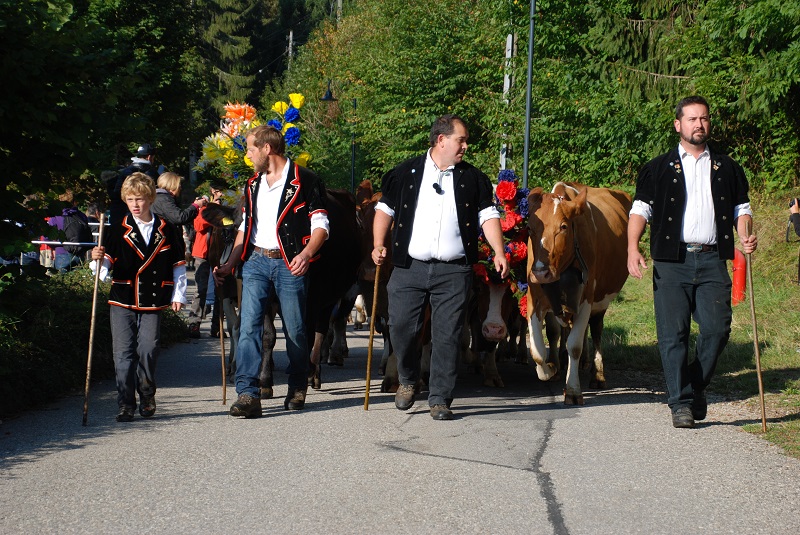 You eat it. your neighbors eat it, the people one town over eat it. And visitors eat it. A lot. and then you send it all over the world so everyone eats it. Problem solved and worldwide reputation established. We found ourselves in the epicenter of cheesiness this weekend, as we witnessed a spectacle where the-cows-that-make-the-milk-the-farmers-turn-into-the-cheese-that-gets-sold-around-the-globe are brought down from their summer pastures, where the mountain herbs on which the cows feast give the milk that je-ne-sais-quoi that makes the mountain cheese so yummy, to the winter pastures and stables where they wait until spring.

The town of Saint-Cergue has turned this chore into something people from the US, Sweden, Belgium, France, and Japan travel for thousands of miles to witness: cows with big old bells (Bruce Dickinson!) around their necks, some with flowery headdresses are poked and prodded down the mountains, do a few tours around the town, spray the pavement with poop and disappear, all this to the delight of the visitors, who feast on Tomme Vaudoise grillée and on Tartiflette, a stew of onions, bacon, potatoes and Reblochon, and thus help to take care of some cheese for which the locals now no longer need worry about transportation costs.

Why, you say, is this area an epi-cheese-center? Because it is frontier country. We overnighted in a hotel that straddles the border between Switzerland and France. And both countries face the above-mentioned ‘what to do with’ dilemma. So they are fiercely competitive. On the Swiss side, the Tomme Vaudoise is the innocent-looking vanguard of the Gruyere and Emmentaler forces a little further inland. The Vacherin Mont d’Or has been claimed as a Swiss cheese, but the French will never recognize it as such. On the French side, there are the formidable stacks of Comté wheels, fittingly being aged in a old fortress in Les Rousses, the Morbier, and the Bleus – those of Gex and of the Haut Jura. for the cheese lovers, this pitched battle makes the border region a Cheese Wonderland. Ah, I had to restrain myself – 0vercome with emotion while looking at the cows, I could have kissed any of those dewy-eyed pretty ladies. Instead, I whispered a quiet “Thank you” in each ear.