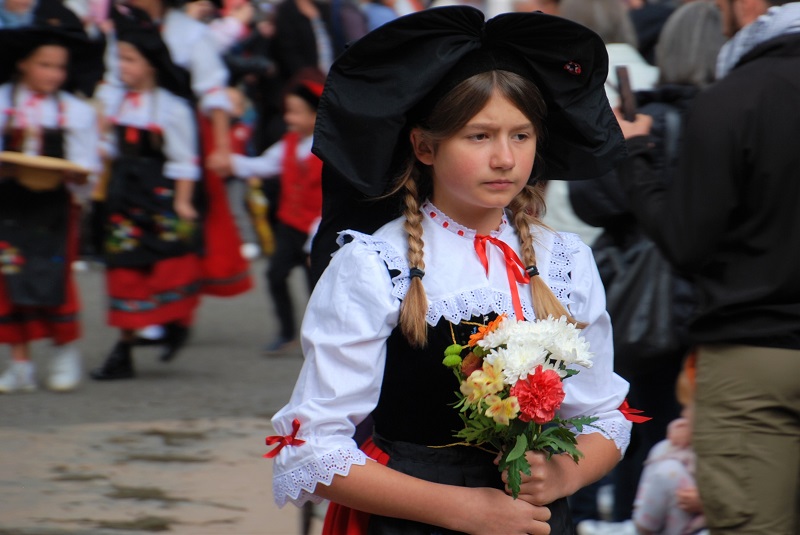 My second ‘cows are coming home’ event in the past month was a Transhumance, and with that, I was of course in France. Check that: I was in Alsace, and you can read in a previous post what that means. If you don’t want to read that previous post: be that way, fine. Suffice to say that Alsace is just not all that French. One of the great discoveries here in the tri-country area is just how little the people that live there seem to care about such trivial matters as international borders. In St. Louis, right on the border to Switzerland, you can hear people on the market ask for something in Swiss German; they don’t bat an eyelash if the answer comes back in Alsatian, and a third person may feel the need to chime in and do so in French.

And so the cows’ homecoming in this part of France is celebrated with folkloric dancing, music, and (wait for it) Alphorns. And if you’re shy about your abilities in French here, just try your best German and especially the older people will respond in Alsatian – a dialect that’s very close to the German they speak across the border, or to the dialect of Basel, for that matter.

What is unique about the Transhumance in the town of Munster (nothing to do with Munster, Germany, or the Peace of Westphalia, for those of you who remember that from history books) are the cows themselves. The first time I was in Munster, it was in winter so I could not find any in the snow-dusted pastures, and a few weeks ago I was in a cheese museum that is supposed to have them, but I was told that they had not come down from the mountains yet….

The elusive cows I am speaking of are tough ladies. They weather wind and rain and cold up in the high meadows of the Vosges Mountains, and so they’re called Vosgesiennes. With their characteristic black and white coloring, they’re some very good-looking bovines, and if you are a purist, you want your stinky Munster cheese to come from Vosgesienne milk. While they are the undisputed stars of the Fête de la Transhumance et de la Tourte, there is an awful lot more to see and do in Munster. The other part of the celebration is the tourte, a pie of well-seasoned ground pork and onions, but there are a lot of other delicacies to try.

Among them is Siaskass, a mixture of fresh cheese, crème fraiche (sour cream, but better), sugar and kirsch. There is smoked saucisson, spectacular farmer’s bread and candies from the mountains made with pine sap or a liquor made of mirabelles. For kids, there are random farm animals to pet, adding to a joyful, chaotic party that brings traffic through town to a screeching halt. And way over everyone’s head, dwelling in comfortable, I daresay luxurious nests perched like gargoyles on the church roof are the flying fortresses that are the official bird of Alsace. To make sure no one can ever miss it: there is a Pharmacie de la Cigogne, next to the Hotel de la Cigogne, which has an enormous Cigogne on its façade. There are Cigognes in the fields on the way to Munster and they hover over the church before landing onto their comfortable pads. The people from the Munster Valley love their cows, but they revere their storks.