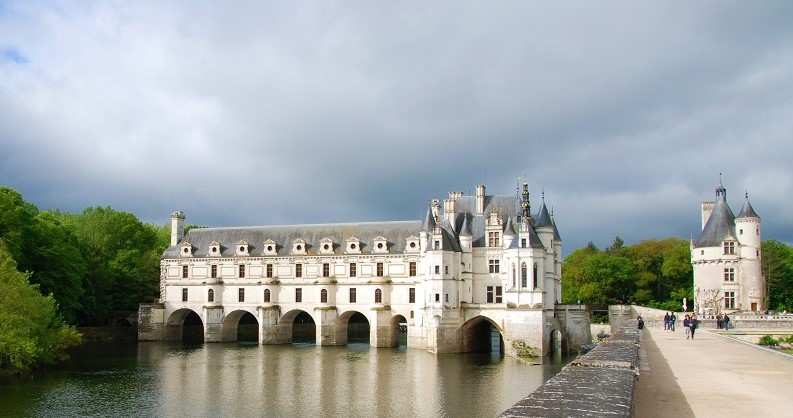 A few months ago I had occasion to visit France (any excuse will do, really, so I will not get into the wherefore and the why). Our destination was a small chateau in the Loire Valley which now serves as a pleasant bed & breakfast with a very friendly and thoroughly philosophical host. We spent three days there and used our time to explore from the castle of Chambord in the east to Nantes in the west.

The Loire is the country’s longest river, and its valley is known as the garden of France. The rolling hills with deep soils are perfect for agriculture and the small towns and the many, many chateaux add enough charm to the region to drown out the annoyance of having to share the very best of these chateaux with hordes of tourists and innumerable French school classes who are forced to learn about Francois I, the king who was in no small measure responsible for the way the valley looks today. He went on an ill-advised conquest to Italy and came back inspired by the Italian Renaissance – the rest, as they say, is history, but there is more to it, of course.

Before architects and artisans, largely imported from Italy, turned the Loire Valley in this incomparable chateau-a-rama, the landscape was dotted with medieval fortifications, because at one point, this was the frontier. Depending on how far back you want to go, the enemy at the gate may have been the dastardly English or the Saracens, the invaders from the Middle East and North Africa. They were routed so thoroughly, as history is told, that they left many of their worldly belongings behind – among them, their goats. This may very well be a mere legend, but in the absence of a better story, we’ll go with this: so many goats were left behind in the Loire Valley that the re-conquering French were left pulling out their hair: what to do with all the goats and all that goatmilk? Obviously, as the French do in most crisis situations, they considered cheese as a solution, and voilà, the region’s reputation as a prodigious producer of goat cheese was born. Even though the Loire Valley provides ample grazing opportunities for cows, there just isn’t anything in the way of cow’s cheese that can compete with Sainte-Maure de Touraine, Selles-sur-Cher, Pouligny-Saint-Pierre, Crottin de Chavignol and Valençay, the quintet of Loire Valley goat cheeses the area is famous for.

On one particularly pleasant evening (we had already gone for a walk along the Cher, a tributary of the Loire; ordered some very tasty savory crepes from a food truck – yes, a food truck in rural France – and chatted with some very friendly Limousin cows), a roadside sign caught Christine’s eye. She suggested we follow it, and where I understood ‘distributeur 24 h/24 h” to be a cheese distributor where trucks bound for all of France were carrying cheese to the six corners of the Hexagone around the clock, she knew exactly what this was.

Of course, someone had to come up with the perfect solution for that all-too-often occurring disaster: there is a sudden great need for goat cheese, but none can be found anywhere in the pantry – the cave, as the French would call it – quel horreur! Enter the distributeur 24 h/ 24 h: the cheese vending machine!

After following the signs around several tight turns and lazy bends in the road, we arrived at the farm owned and run by a couple whose picture adorned a board near the open gate to their property, Sandra and Rémi Mabilleau. They were shown holding some friendly furry goats below a statement of great poetic and philosophical force: “One can’t buy happiness – but one can buy cheese, which is virtually the same thing.”

And then, not far from that sign, there it was: the vending machine. A log of fresh goat cheese coated in ash from door number 5 set us back a mere 4 euros. Once we arrived in our modest room in the small chateau we immediately tucked into a snow-white piece of goat dairy candy, which tasted as fresh as the cheese was white. As my taste buds were getting overwhelmed with the crisp, tangy, creamy revelation that unfolded itself in my mouth, I had visions of domestic tranquility being restored in the middle of the night after a derailed family gathering, a depression narrowly averted, a relationship salvaged in this small corner of the universe – because not far away, with round-the-clock reliability, a log of happiness-inducing, peace-making, splendid goat cheese could be had for only 4 euros, and some deft pushing of vending machine buttons.